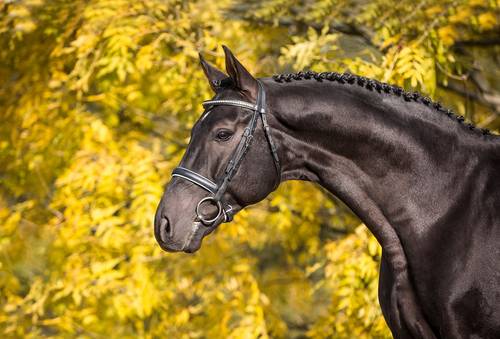 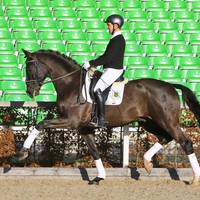 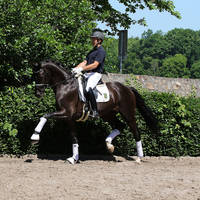 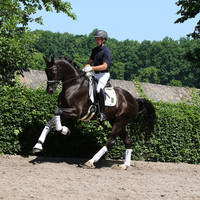 Santo Domingo is an exceptionally congenial dressage stallion, equipped with impressionable charm and charisma, clearly predestined for the grand arena. Whether walking, trotting or cantering - mechanically perfect and, with his flowing, consistent sequence of movements, he shows his extraordinary quality.

In 2015, Santo Domingo made his impressive sporty debut with victories and high placings in tests for young riding horses. He became riding horse champion of Saxony-Thuringia in Burgstädt and placed third at the Southern German Championship in Nördlingen. Furthermore, Santo Domingo finished his 70-day test in Schlieckau with well above-average scores. In 2016 he succeeded in dressage tests according to his age, became national champion of five-year old dressage horses and repeated these successes in 2017, so, nobody could take the title away from him. He became national champion of six-year old dressage horses and won several times in tests for young dressage horses up to medium (M) level. Right from the spot he was much frequented in breeding and, with his first crops, he produced numerous premium awarded foals in different breeding areas; at the German foal championship in Lienen, his offspring placed first and fourth and were price highlights at the auction in Nördlingen and Vechta. The foals were very coveted by buyers from Germany and abroad.

The sire San Amour I has been a constant supplier for auctions, shows and championships already at a young age. Several Bundeschampions and 42 licensed stallions are sired by San Amour, including also Sandbrink, Champion Stallion of the Southern German licensing 2011. San Amour I was honored as main premium winner in 2008, was stallion performance test winner for stallions with emphasis on dressage and qualified right away for the Bundeschampionat where he placed with the best in the final.

The dam's sire, Fürst Heinrich was winning stallion in his 30-day test in 2001, Champion Stallion of four-year old premium stallions on the occasion of the Oldenburg licensing in 2002 as well as celebrated 2003’ World Champion of five-year old dressage horses in Verden. In just a few years, he had developed to an absolute star among all sires – he presented over 52 licensed stallions and more than 100 state and Verband premium mares.

Santo Domingo's dam line is one of the most successful ones in Germany's breeding. The exceptional mare Poetin stands especially out of it: She was Bundeschampion, Federal Champion Mare and World Champion of young dressage horses.

The granddam, state premium mare Power Girl, was placed with the best in tests for young riding horses. Her sire, the dark chestnut Royal Dance, was winner at the Oldenburg licensing in 1998. Over Rohdiamant and Donnerhall he connects the finest dressage blood and in only two years of breeding, he produced three licensed sons before continuing his career in the Netherlands. The great granddam of Santo Domingo, Paloma, was victorious in show jumping up to medium (M) level too. Her full sister Parodie delivered the internationally victorious licensed jumper stallion Goldwing/Sandor Szasz (HUN). The Holsteiner Lucarno, found in fourth generation, participated successfully at the Bundeschampionat in Verden. Later, he won several medium (M/A) level show jumping competitions and placed in advanced (S) classes. His licensed son L'Ami was an absolutely exceptional horse that won many Grand Prixs. In the pedigree Dorfjunge and Junior are followed by indigenously bred Brandenburg stallions. The dam line of Santo Domingo is one of the most successful in the German breeding. The maternal family of Pauline (by Charlatan-Lodz-Delegierter-Wachmeister), which belongs to the main line of the main stud Neustadt/Dosse, is also represented by the national champion mare Prima Ballerina (by Lord Sinclair I). This line produced over 40 licensed stallion such as Achat, Belantis, Brigadier, Browning, Caprigold, Debüt, Duden, Frühtau, Kurant, Quaterback, Samba Hit I-V, Sturmvogel, Silberstern and Sommerhit. Furthermore, stallion performance test and licensing winners, Bundeschampions, national champion mares and World Champions originate from this line. The extraordinary mare Poetin, who was Bundeschampion, federal champion mare and World Champion of young dressage horses, should be named especially. 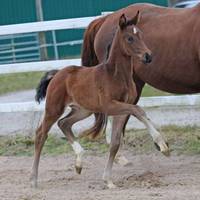 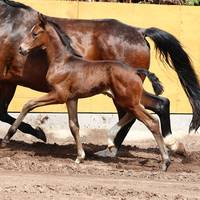 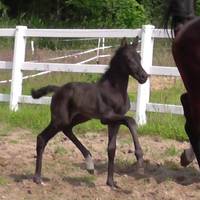 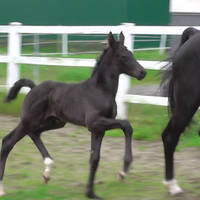 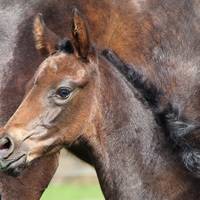 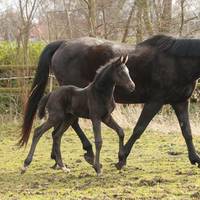 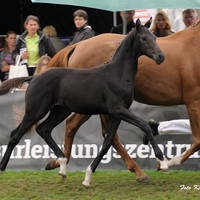 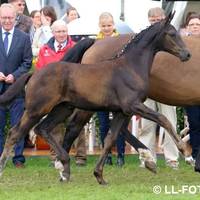 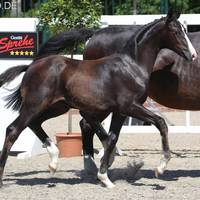 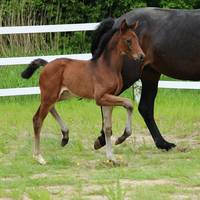 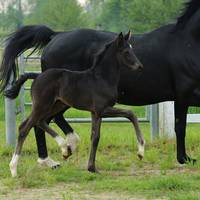 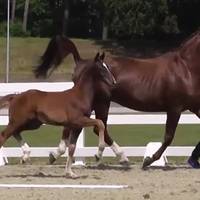