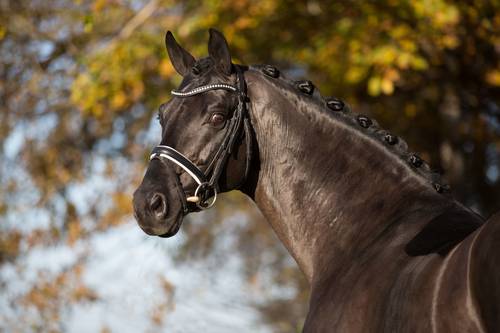 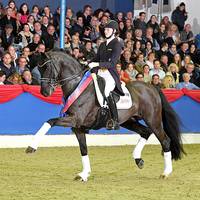 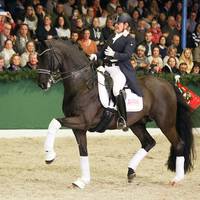 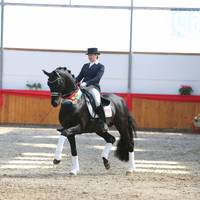 VTV Dressage Stallion of the Year 2017

From an insider tip to a main sire! In the past years the gleaming, black main sire with a fascinating look, Fürst Wilhelm, made numerous headlines. One highlight followed by another: In fall 2014 his first two sons were licensed in Redefin, including the brilliantly true to type reserve dressage champion and Fürst William, meanwhile highly decorated as national champion and Bundeschampion.

The next headline didn't take long: Fürst Wilhelm's son Furtwängler was the celebrated price highlight, selling 135,000 Euro, at the 83rd Fall Elite auction in Vechta. And the stallion licensing fall 2015 brought further highlights sired by Fürst Wilhelm: At the Oldenburg licensing the black Fair Game showed a brilliant performance, which was followed by a win of the performance test. On the occasion of the Westphalian licensing the expressively moving, true to type Oldenburg liver chestnut stallion Festivo was licensed, while Frascino was licensed by the KWPN. His offspring have clearly inherited the gleaming type of their sire and were awarded premiums in many breeding areas. Fürst Wilhelm's eldest offspring were often victorious or placed with the best in tests for young riding horses and dressage horses according to their age. Some of them participated also in the Bundeschampionat. In FN's predicted breeding value statistics for dressage Fürst Wilhelm is ranked among the best with 139 points. In 2016 he received the title “Elite Stallion” in Mecklenburg due to his breeding record. For the same reason he was honored by the Oldenburg Verband as VTV Dressage Stallion of the Year 2017. As demanded from stallions, Fürst Wilhelm completed his performance record through the qualifier for the Bundeschampionat for dressage horses and was victorious up to Inter I-classes under Kristin Biermann.

Fürst Heinrich is his sire, followed by Sandro Hit, De Niro and Rubinstein I in the line of ancestors. In the “background”, from the Wernke breeding house, you can find the unforgotten DLG-mare Love Story (by Freiherr), who made history through her daughter Love Story II (by Akzent II), Oldenburg Champion Mare 1991 – what a pedigree!

Predestined for dressage, Fürst Wilhelm is a good example of up-to-date breeding. His sire, Fürst Heinrich, who left the breeding scene at an early age, was the winner of his 30-day test in 2001, Champion Stallion of four-year old main premium winners at the 2002 Oldenburg licensing and celebrated World Champion of five-year old dressage horses in 2003 in Verden. In just a few years he became one of the top sires with nearly 50 licensed sons and more than 100 State Premium Mares.  With Van the Man and Fürstenball he presented twice the Oldenburg champion stallions. The dam Lady Scarlett is a sired by Sandro Hit who opened up a new era of dressage horse breeding. He was the 1999' Bundeschampion and World Champion for six-year old dressage horses and is now trained all the way up to Grand Prix. Sandro Hit produced several champion stallion among his more than 100 licensed sons.

When bred to Fürst Heinrich, the granddam Lady Devinja gave birth to a colt later licensed named Froschkönig who also successfully competed in championships. In third generation you find De Niro, a I-a main premium winner in Oldenburg. De Niro successfully made his debut in Grand Prix dressage tests at the age of seven. Under his trainer and master rider, Dolf-Dietram Keller, he won the Blue Band at the Hamburg Derby and the German Championships for Professional Riders twice. In 2008 he was honored with the "Hanoverian Stallion of the Year" award and is said to be the most successful dressage sire alive all around the world. The great granddam, Lady’s Rubin, is the dam of the licensed stallion Dream Catcher by Day Dream. Each following generation has a top sire: Rubinstein I, Pik Bube I, Freiherr, Admiral I, Lavendel and Agram. 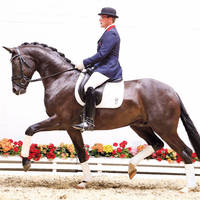 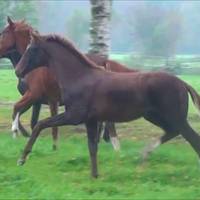 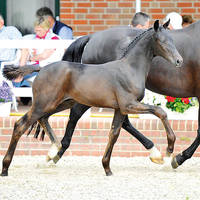 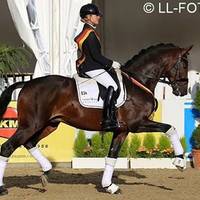 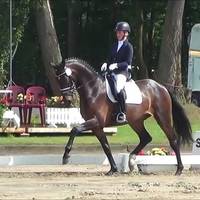 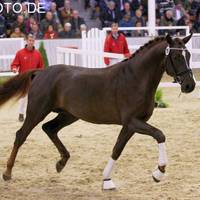 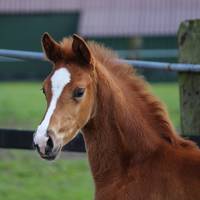 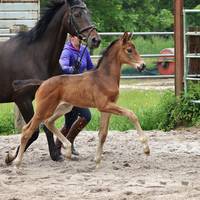 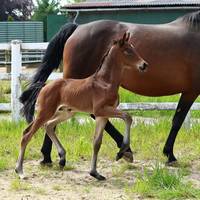 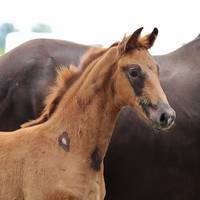 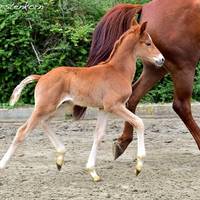