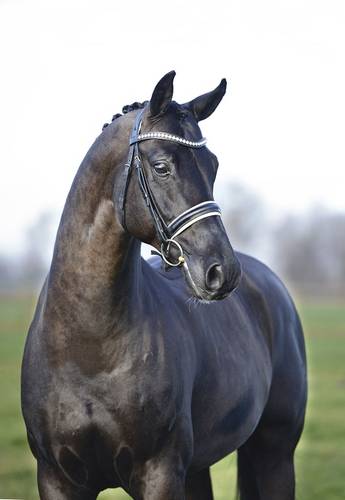 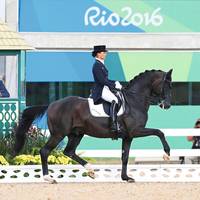 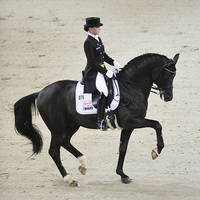 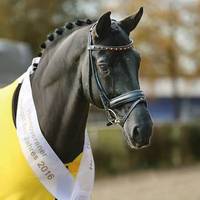 Stages of a world career:

2016: Number one of the WBFSH dressage world ranking

Silver and Bronze Medal at the German Championship in Balve, Grand Prix Spécial and Nations Cup winner at the CHIO Aachen, Grand Prix winner in Dortmund, Hagen and Balve; Hanoverian Stallion of the Year

In 2016 Desperados FRH was the unchallenged number one of all dressage stallions in the world. A dressage stallion in demand worldwide, in sport one of the most successful dressage horses ever. His performance record is impressive and also in breeding Desperados FRH is as safe as a bank. Up to now, 3$ sons have been licensed. In 2015 Desperados presented again a coveted premium stallion named Destacado, who also became Bundeschampion in 2016 and vice-world champion in 2018.

In 2017 he was sire of the winner of the Southern German licensing. Two times in a row, Desperados presented the champion mares at the Herwart-von-der-Decken show 2010 and 2011, namely Doris Day and Delany. Doris Day became Bundeschampion in Warendorf in 2010, after having been celebrated as Hanoverian champion in Verden. Several daughters were awarded the state premium in different breeding areas. An extraordinary number of his eldest offspring has won advanced (S) level dressage classes. Two of them have taken up the cudgels for their father at the show in Francfort in 2018: Descolari and Isabell Werth became second in the Nürnberger-Burgpokal-final, Destiny OLD and Kristina Bröring-Sprehe finished the final oft he Louisdor-Prize in third position.

By receiving the title “Hanoverian Stallion of the Year” Desperados FRH crowned his career in 2016.

Desperados was awarded a premium at the Hanoverian licensing in December 2004 in Verden. He passed his 30-day test in Schlieckau with the highest scores (including a 9.5 for his canter and a 9.0 from the guest riders). Numerous victories in tests for young riding horses, including the 2004 Hanoverian Championships in Verden as well as bronze twice at the Bundeschampionat in Warendorf in 2004 and 2005 are on record. After further training with Falk Rosenbauer, he won and placed in St. Georg and Intermédiaire I among strong competitors, also in Hamburg and Neumünster. In 2009 he successfully competed in the Final of the Nürnberg Burg Pokal. After winning the 2010 German Dressage Derby he placed also in the final of the Media Cup. In 2011 Kristina Sprehe took her place in his saddle and lead him to international Grand Prix successes. Desperados was also awarded the Otto Löhrke Prize as Germany's best young Grand Prix horse. Further victories in Grand Prixs like in Rotterdam/NED, Verden, Oldenburg and Stuttgart speak a clear language. The year 2012 started brilliantly: In Dortmund’s Westfalenhalle the couple dominated the world’s best at the show in Grand Prix Spécial and brought themselves into discussion for the German Olympic team when they competed at the show in Hagen, took the bronze medal at the German Championships in Balve two times and then again at the final review in Aachen. In 2013, he won in Dormund, Perle-Borg and at the CHIO Aachen.

His sire, the black Hanoverian stallion De Niro , won the I-a main premium in Oldenburg in 1997 based on his own record in sport and the quality of his first crop. By the time De Niro was seven, he made a successful debut in the Grand Prix dressage ring and later collected numerous first place ribbons in Nations Cups, the German Dressage Derby and at the German Championships for Professional Riders. In 2008 he was bestowed a special honor: the "Hanoverian Stallion of the Year" award. His dam, Wie Musik, is by Wolkenstein II. This chestnut stallion was the Reserve Champion of the 1992 licensing in Verden, 1993 Bundeschampion of German Riding Horses in Mannheim and won his stallion performance test in Adelheidsdorf in 1993. A full-sister of his dam Wie Musik, named Wie Platine, took third place in the 2001 Bundeschampionat for German riding horses. Through Matcho AA and Pik König you find heroes from the traditional Oberndorf station on the dam's side of the pedigree. The black French Anglo-Arabian stallion, Matcho AA, won his stallion performance test and is a sire of pronounced versatility. Pik König, the fourth link in his chain of ancestors, has gained a reputation as a maker of dressage horses and show jumpers of the very first order. The Hanoverian dam line 53/Foersaci (by Förstergruß I-Lorenz-Amandus-Lorval-Alpenprinz-Julius-Süd-Y. Gameboy) is also the origin of the licensed stallions Condiro (State Stud Warendorf), Don Marcello (private stallion Hanover), Don Noblesse (private stallion Hanover), Don Placido (AUT), Foster, Limonit and Mister A (both State Stud Celle), Londontower (private stallion Mecklenburg), Moseltal and Rocko Barocko (private stallion Mecklenburg) as well as the successful show jumpers Akrobat/Henrike Konzag and Rosalinde/Eric Lamaze/Canada. 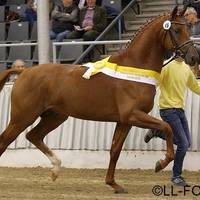 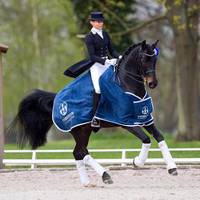