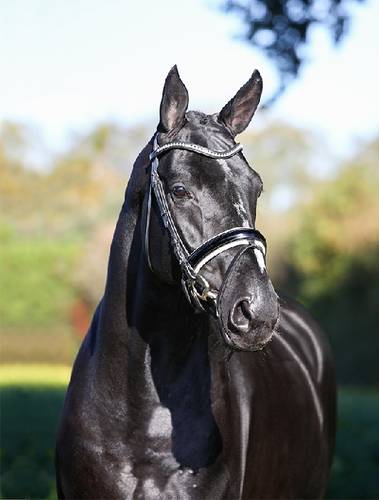 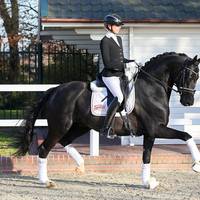 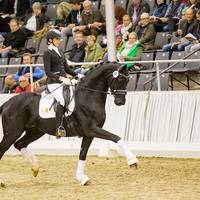 Heir to the throne of Dancier

The trademark stallion Dancier, who unfortunately died much too early, produced this son named Dancier Gold, outstanding in all aspects. An impressive overall impression, standing out with his ideal legs – this is a dressage talent for the highest demand. Dancier Gold convinces with three equally extraordinary basic gaits, a powerful and dynamic action in trot, a big springy canter and a walk always in rhythm with the gait. Having passed an excellent 30-day-test (trot 9,0; canter and rideability 8,5), he made a successful show debut. With Anna-Sophie Fiebelkorn he took the bronze medal at the Hanoverian championships in Verden and made it into the final at the Bundeschampionat.

The sire Dancier was the 2004’ champion stallion at the Hanoverian licensing in Verden, became the 2005’ stallion performance test winner in Adelheidsdorf and the 2006’ Hanoverian vice champion of young riding horses as well as bronze medalist in the class for four-year old stallions at the Bundeschampionat in Warendorf. As advanced (S) class succeeding sport stallion he also had been powerful in breeding: Up to now, 34 sons are licensed, including several price highlights. His offspring collects ribbons in the dressage arena up to grand prix level and is very demanded for auctions.

The dam Weltina delivered also his full brothers Danier (Merita Kelo), who is successful in Finland, and DeLorean (private stallion Brdbg.), premium stallion at the 2013’ Hanoverian licensing and price highlight. When bred to Don Frederic, she delivered the licensed Diablo (private stallion DK).

The dam’s sire Weltmeyer was himself licensing and stallion performance test winner, Bundeschampion, DLG champion and “Hanoverian Stallion of the Year 1998” and an incomparable sire-legend: Over 2,300 registered sport horses, numerous grand prix successful offspring, Olympic horses, seven Bundeschampions, 110 licensed stallions and 470 state premium mares are sired by him. The very best Hanoverian performance blood comes from the third and fourth generation through the time-tested black stallion Airport and Ludendorf. The halfbred Pandur, who was victorious in advanced (S) level show jumping, rounds off the pedigree perfectly.