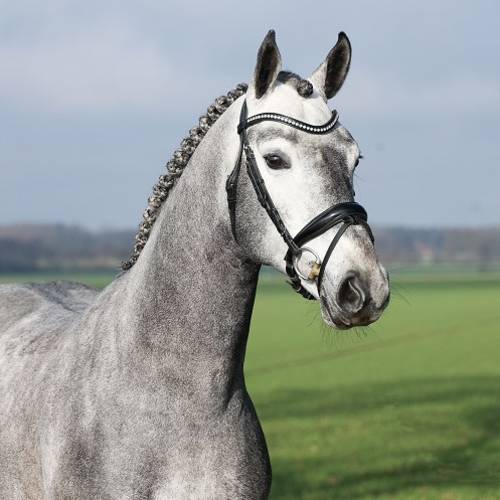 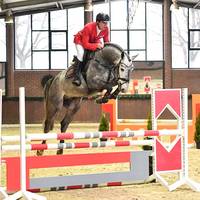 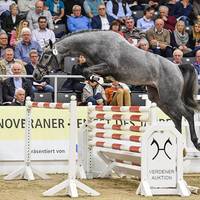 Fast reflexes, power, intelligence, liveliness, ambition, courage and jumping-ability – these are the qualities that predestine Clas Winningmood for the modern, fast top sport. At the licensing in Verden he inspired the experts with his dynamic mechanic in loose-jumping. At the following auction, he was jumping price highlight, selling to Sprehe stud.

Though born late during the year and still developing, there is a full-blooded athlete with the potential to influence decisively the modern show jumper breeding.

Clas Winningmood’s sire Chacoon Blue is a son of the legendary Chacco Blue, who himself was brilliant in the show jumping arena under Andreas Kreuzer. Currently, Chacco Blue is far the best jumper-sire in the world according to the WBFSH-ranking.

In Clas Winningmood’s pedigree Chacoo-Blue’s genes are perfectly paired with the precious lines from Benelux region. His dam Wichita v’t Scheefkasteel Z is a daughter of the Darco/Cassini I-son Winningmood van de Arenberg, who was absolutely exceptional in both sport and breeding. Under Luciana Diniz, Winningmood competed among the best of the jumping world, placed fourth in the World Cup final in Genf, participated in three EC and was victorious in diverse Grands Prix of the Global Champions Tour and World Cups.

Winningmood’s dam M. Unellie is one of the most successful mares of European show jumper breeding and Winningmood’s offspring has reached the international top classes (e.g. Eliot DWS and Van Schijndels Eclips). In third generation Zeus-son Marlon, who is well-known as dam’s sire of the top horses VDL Edgar M and Eddie Blue, crowns the line of ancestors. The dam line, originating in the Netherlands, produced also international show jumpers such as Arista (Conor Swail) and Droi (Estrat Mateu).