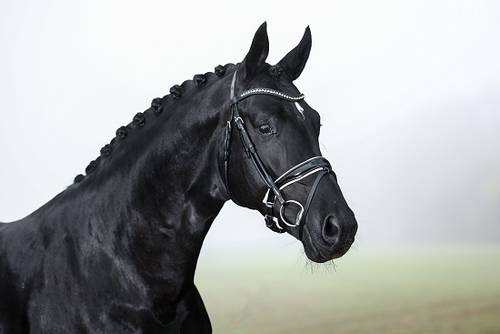 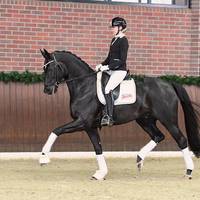 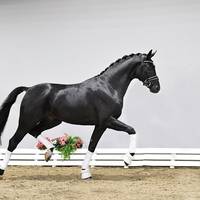 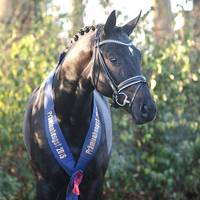 Premium stallion Bon Joker started his young breeding career with a flourish at the Oldenburg licensing in Vechta in 2019. He convinces right away with his highly noble black silhouette and his conformation, which is already well-developed in view of his age. The angulation of the shoulder, back and formation of the hindquarters and the correct legs – just considering his look, it’s clear: Bon Joker is made for the great challenges in both the dressage arena and breeding. When Bon Joker starts to move, he definitely underlines this impression. His outstanding basic gaits present an unforgettable highlight in trot. On the occasion of the licensing Bon Joker created one of some eye-catching moments of the event on the lungeing-rein: Always moving with engaged hindquarters, swinging through the entire body in rhythm with the gait - here, we have a special one!

Hi sire Bon Coeur is a son of grand prix winner Benetton Dream (Tinne Vilhelmson Silfvén), an heir of the successful line of Bolero. He began his career as double vice Bundeschampion of young riding horses in Germany. In the meantime, he’s at home in Sweden. Despite of that he has presented us two crops at German licensings, resulting into 21 impressive licensed sons, including the 2019’ Oldenburg champion stallion.

On the maternal side Bon Jokers got the best genes, too. Both the dam and the granddam were decorated state premium mares. The dam’s sire Fürstenball is a guarantor for top rideability values. And if you have a closer look at Bon Joker’s silhouette, the legendary star sire and world champion Fürst Heinrich is represented at its best. Grand prix winner Rubin Royal (Hendrik Lochthowe), found in third generation, delivered many sport horses for the grand dressage arena. Ingenious sire of both, dressage and show jumping horses, Quattro B and Rubinstein-sire Rosenkavalier secure the performance-genes in the further generations. Bon Joker’s dam line, which has its origin in Westphalia actually, produced many horses for the grand dressage arena in many breeding areas; among them are Dulcia (Ann-Kathrin Lindner) or Rembrandt WS (Julia-Katharina von Platen). Furthermore, Bon Joker’s fourth dam delivered the 2000’ Oldenburg champion mare Donna Doria.