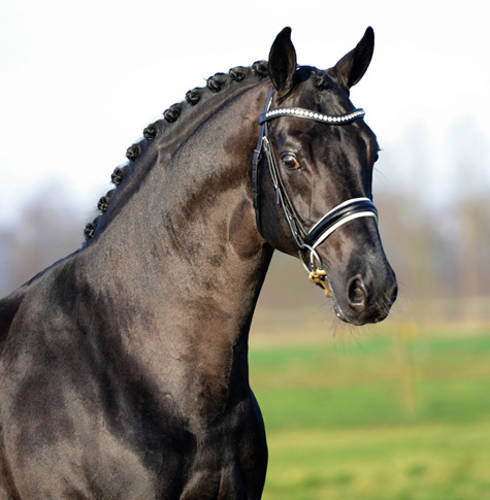 Champion Stallion in dressage at the 30-day test 2007

As the first Reserve Champion of the 2006 Oldenburg licensing, this elegant, high gloss black stallion was one of those stallions to kill for in Germany. Since mid 2015 he is at home in New-Zealand, but his genes will further be available in frozen semen. The potential of his gaits and rideability can only be defined as the ultimate. After a very good 30-day test in Neustadt/Dosse in 2007, Swarovski took his 70-day test at the same venue in 2008, finishing third in a very strong field of competitors. In sport he won and placed with the best in tests for young riding horses. He also won many elementary (L) tests for young dressage horses, achieved high placings at medium level and is now trained up to advanced level. Because of his large first crop which contained a good number of premium and auction foals, the results of his performance tests and his record in sport, Swarovski was awarded the I-b main premium in the lot of stallions with emphasis on dressage at the Oldenburg Hengsttage 2008. In 2010 his first son named Seine Hoheit was licensed and awarded a premium. By now the number of his licensed sons has grown to eight, including the “Southern Champion“ from Munich in 2012, Susu's Boy, the Zweibrücker Champion Stallion 2013 San Marino, as well as Semper Certus, Sharasan, Shatterhand and Scheun Kerl. The eldest offspring were six-years old in 2015 and a good number of them won and placed in tests for young riding horses and dressage horses which immediately put their sire among the best of all German dressage sires with a predicted breeding value of 135 points.

His sire, Sandro Hit, is presently the most popular heir of the Sacramento Song xx bloodline which is established in Holstein but spread widely through Sandro in the Warmblood breeding areas of Oldenburg and Hanover. Sandro Hit was the 1999 Bundeschampion of six-year old dressage horses and World Champion of young horses in Arnheim.

His sire, Sandro Hit, is presently the most popular heir of the Sacramento Song xx bloodline which is established in Holstein but spread widely through Sandro in the Warmblood breeding areas of Oldenburg and Hanover. Sandro Hit was the 1999 Bundeschampion of six-year old dressage horses and World Champion of young horses in Arnheim. His dam, St.Pr.St. Herzdame, has the same proved bloodline combination (Don Gregory x Rubinstein I) as the spectacular Champion Stallion and World Champion of Young Dressage Horses, Don Davidoff, but also Don Rubino, a top auction horse in Vechta. The dam's sire, Don Gregory, was trained up to Grand Prix parallel to his breeding duties and he won or placed with the best in Grand Prix, Grand Prix Special and Grand Prix Free-Style. The granddam Heidemi is the dam of an advanced (S*) level show jumper named Zaphira (by Zeus) and a medium (M) level show jumper named Cellestian (by Cheenook). Heidemi is a full sister of Referee, a dressage horse successful up to St. Georges, and of Rubicon, who placed in medium (M/A) level dressage classes. Rubinstein I, a Grand Prix winner himself who is found in third generation, was a pace-maker in dressage horse breeding all over the world in the 1990s. This mare family often produced top sport horses such as the two top auction candidates, Floral Dance (by Furioso II; a full brother of the great granddam) and Stradivari; but the line also churned out not only premium mares but also dressage and show jumping athletes that reached the highest level again and again. In the following generations you find the stallions Hessenstein/Trakehner, Wotan, Ortelsburg/Trakehner, Dekan and Christof I which means that the origin lies in the Hanoverian breeding area. Line 325/Kateva (by Königstein-Weißdorn-Wilhard-Bonus-Mallock-Jellachich-Zernebog-Y. Herodot xx-Brillant-Paroli) is also known for the licensed Hessenstein/Trakehner sons, Gambrinus (USA) and Herz As (private stallion Hanover) as well as Don Miguel (private stallion Spain).