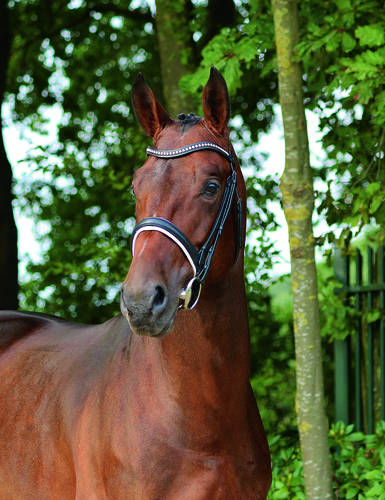 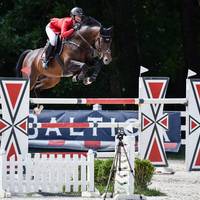 Horse breeding is family history: The OS-premium stallion 2012 from our own breeding, Self Control. Sovereign at the jump with enormous ability, ideal technique and bascule, Self Control makes a statement with unmistakable attitude towards performance and good gaits. His ground-covering uphill canter, originating from powerful hindquarters, makes him predestined for show jumping. In 2013, he finished his 30-day test in Schlieckau with a final score of 8.63 for jumping (free-jumping 10.0; jumping ability 9.25) among the top group of strong competitors. In the meantime, Self Control won many ribbons in tests for young show jumpers. This special talent is caused by the exclusive pedigree: Both, dam and sire, were winning at advanced (S) level under a member of the Sprehe family. The sire Stakkato Gold, who is meanwhile the number one in FN's predicted breeding value statistics, was best jumper stallion of his age group on the occasion of the Hanoverian licensing in Verden in 2003. He proved his extraordinary jumping talent at the 30-day test in Prussendorf in 2004, receiving the ideal score of 10.0 several times. In the meantime, Stakkato Gold has placed with the best in international advanced (S***) level competitions with Jan Sprehe. Until now, six sons named Seal, Self Control, Sir Obolensky Z, Solid Gold Z, Stargold and Stalido were licensed. The dam Quinta collected many first places at advanced (S) show jumping level with Jörne Sprehe. From his first foal crops Self Control's offspring was awarded a premium many times and presented themselves with charisma and demonstrated very supple and smooth basic gaits.

The dam's sire Quattro B can present an exemplary career as stallion. In 1993, he placed second in his stallion performance test in Medingen with equally high scores for rideability and jumping ability. These attributes were also proven by him in sport with victories in medium (M) level tests for young dressage horses as well as for young show jumpers. Later, he even succeeded in the international advanced (S) level jumping-course. His breeding record is impressive too: Quattro B produced advanced (S) level sport horses for all disciplines. Over the jumper millionaire Zeus, the multi-talented sire Welt As, the legendary Anglo-Arabian Inschallah AA and the Ramzes AA son Ramm, Self Control has been strictly bred for performance. The Oldenburg line of Schimoni II (by Olex) is also known for the licensed stallion Dream Rubin (State Stud Moritzburg) and the successful show jumper Donovan/Jürgen Kurz.

Licensed for OS-International, Oldenburg, Westphalia and Rhineland as well as all Southern German and new German State Verbands.