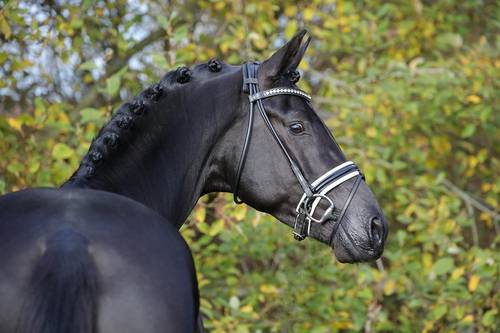 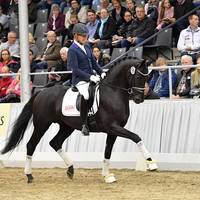 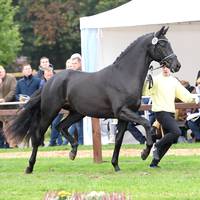 A brilliantly presented noble black stallion, clearly recognizable as son of his popular ancestors! Large-framed with strong limbs harmoniously integrated into the body – he is gifted with phenomenal basic gaits, always engaged hindquarters which cause a maximum of basic impulsion that has no equal. He fascinated with pure elasticity at the presentations in Verden every day of licensing. First impressions on the lungeing-rein and under saddle confirm: here we have something really special. His steady willingness to perform with much inner peace and his first-class character make him absolutely exemplary.

Due to Millennium and Desperados FRH in his pedigree he unites two flagships of inheritance from the Sprehe stud. His sire Millennium started a unique sire-career right from the spot and, in 2017, was entitled “Elite Stallion” of the Trakehner Verband as youngest title holder ever. In the meantime, 36 sons are licensed (just nine in fall 2017), including the licensing winner His Moment (2016), Kaiser Milton (2017), Morricone I (2014) and Sir Sansibar (2014), in addition, many premium stallions and price highlights in different Verbands. Furthermore, Millennium is already successful in sport at advanced (S) level.

The dam D’Esperanza passed a very good performance test, was I-c premium mare at the Friedrich-Jancke show 2010 and, in the same year, I-d premium awarded at the Herwart-von-der-Decken show. For years the dam’s sire Desperados FRH has been a guarantor for medals for the German championship team. In 2016, he took the team gold medal and individual bronze medal with Kristina Bröring-Sprehe at the Olympic Games in Rio, became German Champion in Balve in 2014 and 2015, won the team silver medal at the 2012’ Olympic Games in London and became Team European Champion in Herning in 2013 and Team World Champion in Caen/FRA. In 2015 he took the team bronze medal and twice the individual silver medal at the EC in Aachen. In 2016 he was celebrated as “Hanoverian Stallion of the Year”. The granddam, st. pr. mare Wisconsin, was multiple winner in tests for young riding horses and originates from Wolkentanz I, Bundeschampion and highly esteemed riding horse-maker.