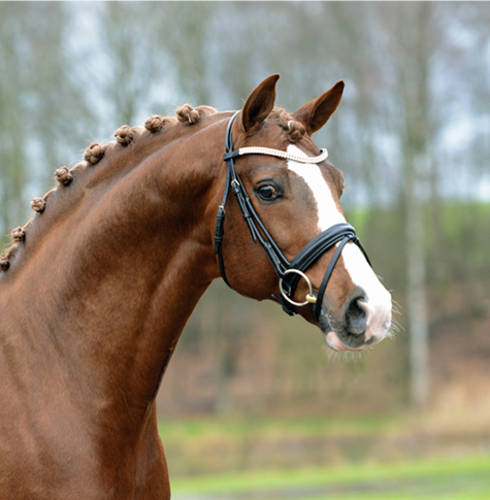 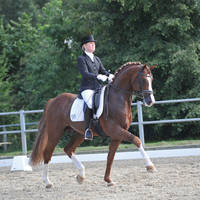 As Champion Stallion at the Oldenburg licensing 2005 Kaiser Karl has captured all the audience's hearts with his imposing appearance. He achieved the sensational record price of 420,000 Euro of all Oldenburg stallion auctions. Unbelievably charming, Kaiser Karl has all of the traits that a dressage star needs: Outstanding gaits, the best possible rideability, an eagerness to learn and a first class character. In 2006, he was Oldenburg Champion in Rastede, later Vice Bundeschampion in Warendorf and at his 30-day test in Neustadt he received the highest score given for rideability. The overall score in the predestined test was 8.81, 9.34 for dressage (rideability 9.5) and supernatural scores for jumping underline especially the extraordinary quality of this top-class stallion. Kaiser Karl took his 70-day test in 2009 in Schlieckau where he reached an outstanding fifth place in a group of 44 strong competitors in performance class I. In the meantime, he was winning and placed with the best in medium (M) level tests and has been trained to the upper class. In breeding as well Kaiser Karl is becoming a star: Elegant foals with a certain self-carriage and ideal quality of movements speak for themselves. At the foal auction in Benstrup in 2007, Kaiser Karl presented with Kaiser von Florestan an absolute price highlight of 17,500 Euro. The eldest offspring have already won in tests for young riding and dressage horses and, therefore, Kaiser Karl has a current breeding value in dressage of 145 points, ranking him among the top five percent of all German sires. By now, two sons were licensed (including Karl Kingsland) and several daughters were awarded the state premium.

Kaiser Karl is from Kaiser Franz' first crop, a stallion from the famous de Baey dressage line who proved great talent for dressage at his stallion performance test and obviously passes this talent on to his progeny. The dam, Jeanne d'Arc, is a daughter of the Holstein Landgraf grandson, Lefèvre, who sired many sport horses that have reached advanced (S) level in show jumping. Breeding his Dutch granddam, Janda, to the Holsteiner, Lefèvre, turned out to be the perfect match: Their strong moving daughters, Jeanne d'Arc I and III, full sisters of Kaiser Karl's dam, Jeanne d'Arc II, all received a State Premium and their full brother, Rokko, is a successful show jumper. The dam line has been internationally influenced through the top Dutch sire, Zeoliet (by Ramiro-Abgar xx), who collected ribbons in dressage as well as show jumping and also passes on this double talent, and the Thoroughbred stallion, Ballyvie xx (by Ballymoss xx-Worden xx). Since Lefèvre's sire, Lombard, is out of a Ramiro dam, this stallion of the century is found twice in his pedigree. Ballyvie xx has the same sire as Ballyboy xx, a stallion once a very popular in Oldenburg. In the further generations follow the Dutch stallions Hidalgo, Norton, Theobald and Ulafino. Kaiser Karl is the first licensed representative of this Dutch dam line.

Licensed for Oldenburg, Hanover, Westphalia and Rhineland as well as all Southern German and new German State Verbands.