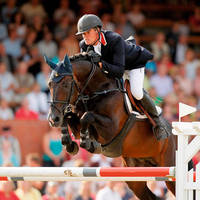 Gavi, one of the most successful stallions in international show jumping, is offered in Benstrup. After a brief debut in breeding, this talented, strong-minded fighter was successful for several seasons in international competitions for Germany with Helena Stormanns, winning grand prix and also competing in Nations Cups. After a short period in Scandinavia, Hilmar Meyer started to ride him and they immediately won grand prixs again. In July 2008 they easily took the Hanoverian Champion title. In Germany alone there are 33 first places in advanced (S) level tests on record for this classy stallion.

Gavi did not spend much time in breeding (1998 at Vornholt Station in Westphalia) but sired a few offspring, including a licensed stallion named Gavio, who competed successfully in international competitions under Thomas Weinberg. The younger offspring (born later than 2010) are still growing into the sport and have already won in tests for young show jumpers several times. In 2015 a convincing son, named Galileo, was licensed in Westphalia and, in 2017, Gavi presented the striking champion stallion Giuliano Gustavo at the Austrian licensing. At the championship of German broodmares on the occasion of the EC 2015 in Aachen, Gavina (Gavi/Chaseur I) received the very good score 8.8, being the best four-year old mare. In 2016, Gavi was sire of the price highlight Gabalier HRH, who was sold for 90,000 Euro at the Verden November auction. These offspring put Gavi among the top sires of all German jumper sires according to German FN's predicted breeding value statistics. There were e.g. Gambrinus 94 and Graffiti 81, who both won tests for young show jumpers in series, and Galan (Gavi/Quidam's Rubin), who qualified for the Bundeschampionat at the age of five. His sire Graf Grannus, son of the important trademark stallion Grannus, produced 21 sons that were licensed and became “Hanoverian Stallion of the Year 2004”.  Year after year, his offspring have impressive records in show jumping. His dam is also dam of other licensed stallions und delivered several internationally successful dressage horses and show jumpers. Her sire is Wendekreis-son Werther, who can often be found in pedigrees of top sires. She originates from the legendary mare line of Agenda, which is known as a Hanoverian jumper line characterized by performance and toughness. 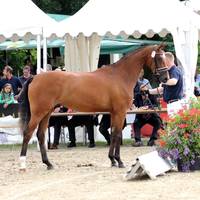 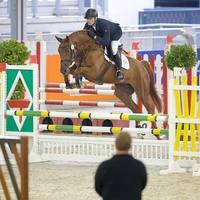