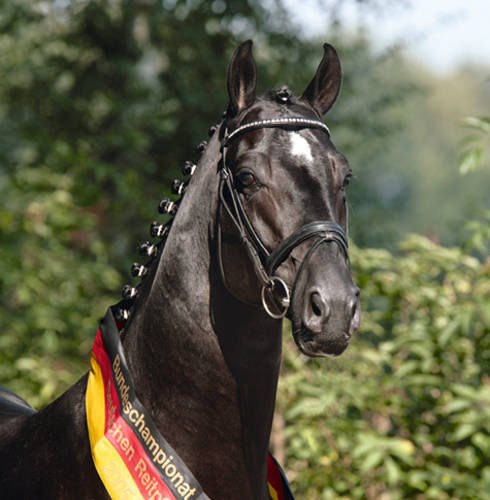 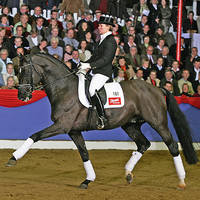 Federal Champion and best at the test

A strongly moving Donnerhall grandson colored in noble black. Duino caused a sensation for the first time when he was sold as absolute price highlight at the spring elite auction 2005 in Vechta. In autumn, he then became Bundeschampion of all three-year old German stallions in Warendorf. In spring 2006, he continued his winning run as best stallion at his 30-day test in Schieckau with an overall score of 8.76, 8.26 for jumping and a sensational score of 9.33 for dressage. In 2007, Duino won an elementary (L) test for young dressage horses with 9.0 and qualified for the Bundeschampionat in Warendorf. Meanwhile, he has won in a row at Prix St. Georges level and has now constantly been successful in advanced (S) level dressage classes for young riders.

From his first crops several foals were awarded a premium and sold for top price, among others, at the Swiss foal auction 2007 in Frauenfeld. According to FN's predicted breeding value statistics 2013 Duino is ranked in the top group of German sires with 148 points.

The sire Donnerschwee was premium stallion and auction price record before he has started his career as dressage stallion being successful at Grand Prix level. Among his offspring are the gray horse D-Day, a prestigious premium stallion, and the state premium mare Weissera, Oldenburg Champion and advanced (S) level horse, the premium stallion Don Rubin, who won many times up to medium (M) class, as well as the licensed sons Donninger and Don Rubinland (private stallion Oldenburg). The dam Anjessa delivered already successful sport horses and Duino's full brother Duino II, a highly paid elite auction horse at the spring auction in Vechta in 2006. She is full sister of the medium (M) level licensed dressage stallion Skywalker and half sister of state premium and elite mare Arancha (by Sandro). Arancha produced, when bred to Sion, both medium (M) level dressage horses Satchmo and Sion's Boy as well as the Verband premium mare Asina. Over the highly esteemed versatile sires Sion (e.g. EC Gold medalist Sterntaler Unicef/A.-K. Linsenhoff) and Figaro (e.g. Figaro’s Boy/Ludger Beerbaum) there are top-class rideability and performance sires on Duino's maternal side. Numerous further top dressage and jumping horses are out of direct relations. This Oldenburg line of Angel (by Orient-Focker-Ulrich-Regimar-Hellwig) is also known for the highly decorated DLG mare Angela as well as the show jumper Ultano 2/Carsten Schöchert, who has been very successful for many years.

Licensed for: Hanover, Oldenburg, Westfalia and Rhineland as well as all Southern German and new German State Verbands.