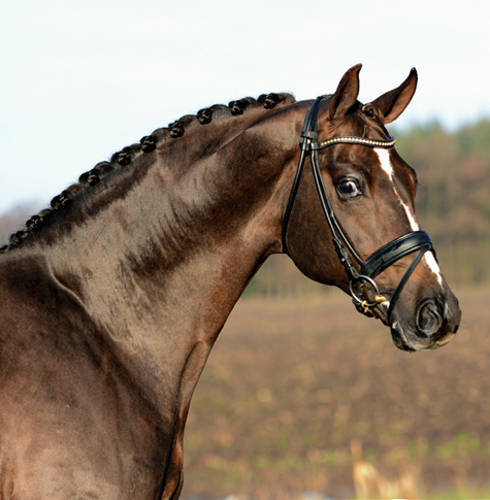 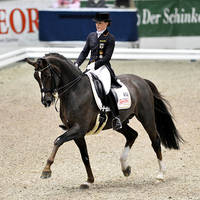 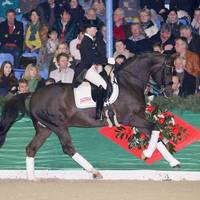 With elegance and grace Donnerball wins the hearts of breeders. His characteristics: A maximum of rideabilty, basic gaits in a class of their own and the legendary type of the stallion Abglanz, which is here reflecting exemplarily! Donnerball was I-f premium stallion at the Oldenburg licensing 2002 and took a clearly above-average 30-day test in Vechta. In 2003, he became, after winnings in tests for young riding horses, Oldenburg Champion of young riding horses and participated in the Bundeschampionat in Warendorf. In 2004, he took the title of Oldenburg Vice Champion and Vice Bundeschampion, followed by victories in novice (A), elementary (L) and medium (M) level tests for young dressage horses. In Verden, he became the sensational Vice World Champion of five-year old dressage horses 2005. In 2007 and 2008, he succeeded in Prix St. Georges competitions and Inter I. Furthermore, he was finalist in the Nürnberg Burgpokal 2008. In 2013, he was winning under Kristina Sprehe in international Grand Prixs and Gran Prix Spécial.

Donnerball passes on his traits in view of type and quality of movements: He supplied top foals at several auction venues. In 2004, Donnerball was awarded the Oldenburg I-c main premium for stallions with emphasis on dressage due to his excellent first crop of foals. By now, five sons named Da Ponte, Dolmetscher, Don Ed Hardy, Don Revelino and Douceraux have been licensed. A high number of his daughters received the title state premium mare, thereunder Diandra Del Monte SHM, I-e premium at the elite show 2007 in Rastede.

His eldest offspring are successful in basic competitions with emphasis on dressage. In 2009, he presented his masterpiece, Carlotta OLD, Champion Mare at the Oldenburg elite broodmare show in Rastede. According to German FN's predicted breeding value statistics he walks on his father's traces: 145 points place him among the top five percent of German dressage sires, a number of offspring is successful at advanced (S) level. Donnerhall, a line-founding stallion in the German breeding, produced over 100 licensed sons, including the Oldenburg champion stallion Don Kennedy (2003), over 130 state premium mares, thereunder the Oldenburg champion mares Primavera (1992), Hallo (1994), Fabina (2003) and Love Story V (2004), three Bundeschampions Don Primero (1990), Davignon I (1992) and Del Piero (1998). In 2008, the offspring of Donnerhall, double World Champion under Karin Rehbein, have won over 1.8 million Euro. The dam, Vb.Pr./El.St. Calaida, gave birth to the state premium mare Cariana by Donnerschwee. Breeding state premium mare Carrara, full sister of Calaida, to Rohdiamant, resulted in premium stallion Ramoneur (private stallion Oldenburg), who was licensed in Vechta in 2004. Dam's sire Alabaster was Bundeschampion in dressage in 1994. The granddam, state premium mare Carmen, was in the Brillantring in Rastede in 1994 and delivered several offspring for the Oldenburg elite foal auction. Freiherr and Prinz Miro, well-known Oldenburg sires, are found in third and fourth generation. The line goes further back over the stallions Censor, Ernö, Abendjäger and Axtmann I and leads to a line of the approved Hanoverian station Sudweyhe. This Hanoverian mare line 323/Fagentin (by Feinschnitt II-Flugwind-Alciatus-Schwabenland I-Annual-Don Juan) is also known for the stallions Adlerfels (state stud Warendorf), Cerberus (state stud Schwaiganger), Dujardin (licensing winner Redefin 2012), who is stationed at our stud, Follow Me (licensing winner 2012) and Fiderbach as well as the Oldenburg champion mare 2013, Calamity Jane.

Licensed for Oldenburg, Hanover, Westphalia and Rhineland as well as all Southern German and new German State Verbands.