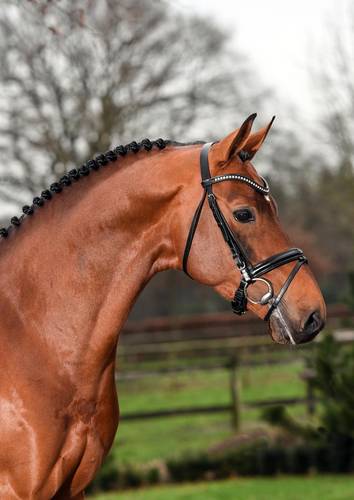 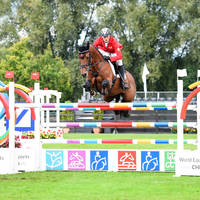 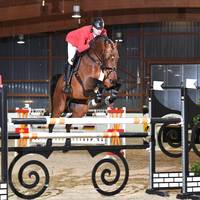 „At its best“, that's only seldom been seen what Dicapo strikingly performed over the obstacles on the occasion of the OS-licensing in Vechta in 2011. Enormous jumping-ability combined with an exemplary manner and perfect leg-technique – for sure, a worthy champion stallion in the group of strong jumper stallions from international provenance. The high estimation of the OS licensing committee has been fully confirmed at his 35-day test in the Danish Vilhelmsborg. Dicapo finished his exam with top scores and, according to his age, competed successfully in classes up to the international Youngster Tour in Denmark. Since 2017 he is back with us in Benstrup and competes successfully at the highest level. He was four times winner and placed with the best in advanced show jumping classes. He crowned the last season with Patrick Bölle by becoming reserve winner of the first competition on the occasion of the German Young Riders Championship in Aachen.

In 2013 he presented his first crop that was convincing with a high number of foals awarded a premium in different German breeding areas, just as in Denmark, where he could present highly successful jumping youngsters right away. In 2018 we again expect his first offspring after his return to Germany. The sire Diamant de Semilly won, under Eric Levallois (FRA), the team gold medal at the WC in Jerez and, a year later, took team silver at the EC. Due to the fact that he's strictly bred for performance, he has been proclaimed “Best Sire of Young Horses” at the French championships in Fontainebleau, looking at an entire armada of international top horses. Therefore, he ranks as the most successful jumper-maker in the world. He has been in the lead of the WBSFH ranking of sires with emphasis on jumping for years. When bred to Diamant de Semilly, the dam Whitley also produced the full brother Don's Diamant, who was licensed in Zangersheide and is successful internationally at the upper level. Her sire is the Belgian bred and internationally successful Phin Phin, who connects the Olympic jumper stallion Chin Chin and Abdullah/T. in his pedigree.

Dicapo's granddam delivered the licensed Univeau W (by Numero Uno), who collected ribbons internationally, as well as the advanced level successful elite mare Demi by Canturo. She is a daughter of the Holsteiner Burggraaf, who influenced a lot the Dutch breeding as a son of the sire of the century Landgraf I. The pedigree leads to a proven Dutch dam line and shows an enormous density of performance through the many successful top horses in sport as well as licensed stallions.