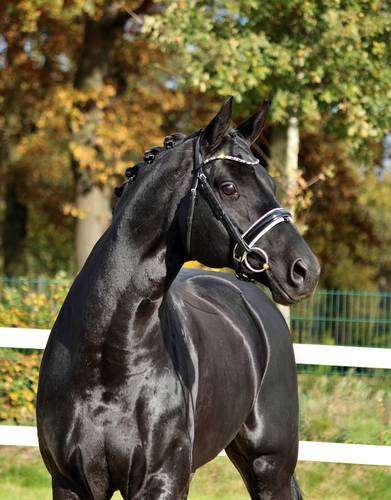 De Niro - Desperados FRH - Destano: These are contracts with generations! Destano is a good-sized stallion with a modern silhouette, correct conformation and the best character. Supple and dynamic, he knows how to put on a first class presentation by showing off his gaits. As expected with such a pedigree, he's highly rideable, very intelligent and eager to learn. Despite of the high activity in breeding, he has won in the dressage arena up to Intermédiare I and is trained up to grand prix. In 2016 he placed first with his rider Sabine Rüben in an advanced (S) class and third in the St. George Spécial at the horse show in Neu-Anspach (Wintermühle). In Schiffdorf-Geestenseth they succeeded again and won both, the advanced (S) class and the St. Georges Spécial.

Destano was the I-a main premium winner at the 2011 Oldenburg Stallion Days in Vechta. After evaluation of his performance record in sport, assessment of his first crop and current physical state, the stallion committee declared him the absolute "Number One" of four and a half-year old stallions in a field of strong competitors that were also presenting their first crops. As heir to the throne of his Olympic sire he was strongly frequented in the past years. In the past years he presented highly paid auction foals and produced 21 licensed sons, including several premium stallions. In 2015 Destano was sire of the second reserve champion at the Mecklenburg licensing in Redefin. In the following two years, six other sons were licensed at different licensing sites. At the 2016’ fall elite auction in Vechta he presented a price sensation: Denoix, premium stallion and Oldenburg vice champion of four-year old stallions in Rastede, was sold for 300,000 Euro to the American Nancy Gooding. Furthermore, he produced the champion mare and second reserve champion mare in Mecklenburg, the national champion mare in Carinthia (AUT) and the winner at the Herwart-von-der-Decken show. In 2017 he was again sire of further champion mares in Austria and presented the Mecklenburg champion of four-year old riding horses. An above-average number of youngsters are successful in tests for young riding horses and dressage horses.

His sire, Desperados, is currently one of the most successful dressage horses worldwide and medalist guarantor for the German championship team. In 2014 and 2015 he was, with Kristina Bröring-Sprehe, German Champion in Balve, took the team silver medal at the Olympic Games in London in 2012, became  team European Champion in Herning in 2013 and team World Champion in Caen/FRA in 2014. Last year, he won the team bronze medal as well as two times the individual silver medal at the EC in Aachen. The dam's sire Brentano II is State Stud sire in Celle. This liver chestnut stallion was licensing winner, finalist at the Bundeschampionat and trained up to Grand Prix level. Due to his outstanding breeding record as dressage sire (e.g. sire of numerous world-class horses such as Barclay II/Sven Rothenberger, Brentina/Debbie Mc Donald and several others) he was nominated „Hanoverian Stallion of the Year 2003“. With the large-framed Anglo-Norman Imperator, Wenzel I, Absatz, Valentino xx and Lateran/T. first-class sires can be found in the further generations of this dam line, which has its origin in the area of the tradition-rich station Stedenbergen (near Verden). Destano's special card is the top-class Hanoverian dam line 749/Eckernförde II (by Erlkönig/T.-Neon-Optimist-Jugurtha-Y. Grand-Zampa-Caplan-Ramm). This line is also known for well-known stallions such as the famous brothers Argentan I and II, Downtown (private stallion NL), Hochfein (state stud Marbach), Labadia (private stallion Thuringia), the Olympic horse Lancet (private stallion NL, Hesse, internationally successful with Imke Schellekens-Bartels/NL and Emma Hindle/GBR) and Western Star (state stud Celle). They represent this line just like the queen of numerous broodmare shows, the DLG Champion Mare Goldlady, whose grandsons Frenchman I and II were both licensed. In Holstein this line is registered under number 8777 and presented the first-class half-brothers Calvin Z, the shining Cantus, also Lansing, who all became top jumper-sires.

Licensed for Hanover, Oldenburg, Westphalia and Rhineland as well as all Southern German and new German State Verbands. 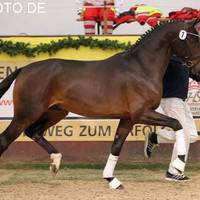 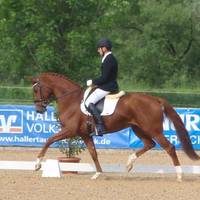 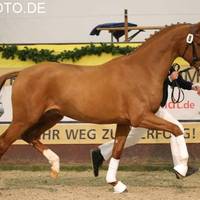 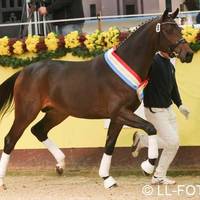 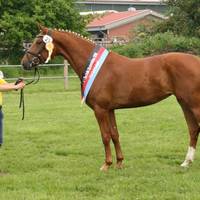