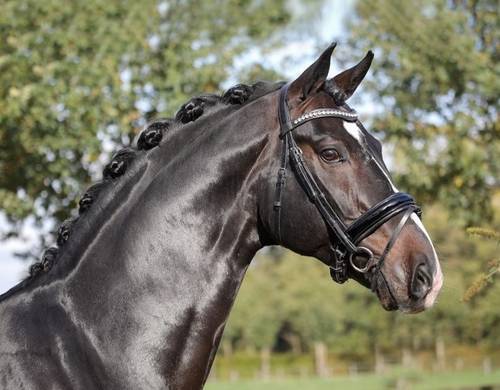 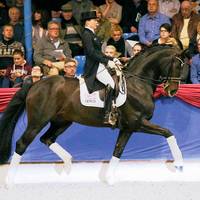 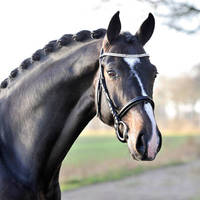 Brilliant type dressage stallion and the radiant Reserve Champion of the 20th NRW licensing in Münster-Handorf 2010. Daily Deal is blessed with first class gaits and ultimate rideability. His natural talent for collection fascinates again and again and he is always magnificently in control. We expected a lot from him at his 30-day test in Münster-Handorf in 2011 and were not disappointed. In the meantime, Daily Deal won and placed with the best in advanced (S) level dressage tests under Sabine Rueben and is now one of our most promising talents in the stable. He presented first crops with numerous foals awarded a premium as well as price highlights at auction sites (fall elite auction, Vechta 2015 – most expensive filly selling for 32,000 Euro). In 2014, his son Daily Diamond was licensed in Verden. In 2015, Daily Diamond won at the stallion performance test of KWPN in the Dutch Ermelo with 87.9 points, reaching an individual score of 9.0 for almost each criteria. In the following years further sons were licensed. Again and again, the excellent quality of basic gaits characterizes Daily Deal's offspring. In 2016 and 2017, they made a first-class debut in sport, achieving victories and high placings in tests for young riding horses and dressage horses. In 2017, Daily Deal presented a well-placed daughter at the Elite Broodmare Show in Rastede as well as coveted offspring at elite auctions in Vechta.

The sire Diamond Hit was both Vice World Champion and Vice Bundeschampion of five-year old dressage horses in 2002. Later, Diamond Hit succeeded at advanced (S) level on the international parquet. With Emma Hindle/GBR he placed in the Grand Prix of Aachen, Wiesbaden and Stadl Paura/AUT and is also time-tested as sire of excellent dressage horses and significant stallions.

The formative DLG-winner Romadour II and the Thoroughbreds Lucius xx and Baczyn xx, found in the the further generations, are again sires who embody performance and noblesse. The originally Hanoverian dam line 1371/Naburdina (by Nennheim-Nordland etc.), who was cared for in Westphalia, produced performance-horses for advanced (S) level in dressage and show jumping at a high number. Daily Deal is the first licensed progeny from this line. 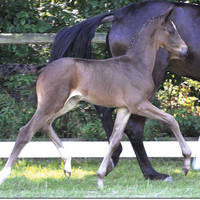 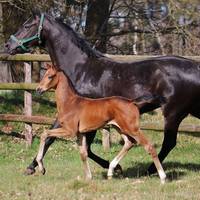