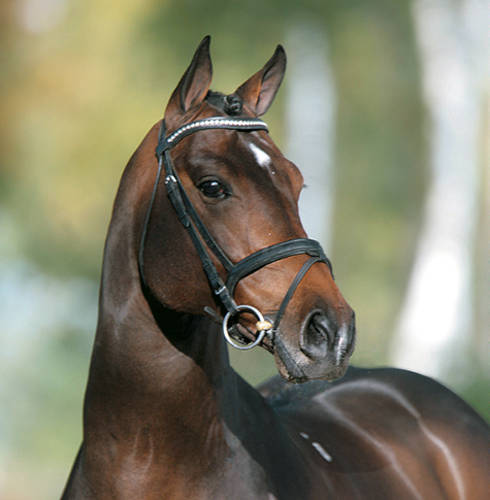 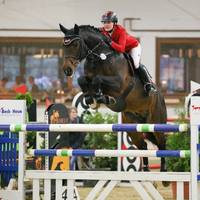 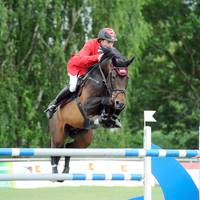 A Contender for top level sport

Holstein performance stallion with a respectable, elegant frame. Cola has everything that distinguishes a modern sport horse and he has turned into a top athlete: Self-assured and with unlimited ability, he easily does what he's asked to. He took his 30-day test in 2004 in Schlieckau, finishing with the highest possible scores in jumping. Cola confirmed his exceptional quality at shows by winning several elementary (L) and medium (M) level tests for young show jumpers. At the Bundeschampionat for show jumpers in Warendorf in 2006 he won a qualifier with an 8.8 and again qualified for the Bundeschampionat in 2007. In the following years he and Jan Sprehe were highly placed in international advanced (S**) level show jumping classes and since 2011, he has been successfully presented in the international sport (e.g. in Linz/AUT, Budapest/HUN) by Josef Jonas Sprehe. At the end of 2013, he moved to be trained by Tanja Sprehe who competed with him successfully too in national and international jumping classes.

In Vechta in 2006, Cola was awarded the I-c main premium for the quality of his first crop of foals, many of which were awarded a premium. A remarkably high number of his eldest offspring is successful in advanced (S) level show jumping. The Westphalian mare Fiona 483 (dam by Frühlingsball-Paradox I-Gottschalk) with Jörne Sprehe should be especially mentioned.

The high score of 142 in jumping according to German FN's predicted breeding value statistics speaks for itself. His first son, Cosil, was licensed in Munich in 2009. In 2010, Cola Zero was another licensed son who was awarded the I-b main premium for stallions with emphasis on jumping. Furthermore, Cola Zero achieved the highest score for jumping in both, the 30 and the 70 day test.

His sire, the extraordinary Contender, 1987 stallion performance test winner in Adelheidsdorf, has bred in Oldenburg for three years. In the meantime, there are more than 120 licensed sons in breeding all over the world. Already during his lifetime, Contender is counted to the sire legends due to winning the Riders Tour twice, the European team gold winner Checkmate/M. Michaels-Beerbaum as well as the 2004 Olympic bronze medalist and two-time European Champion 2005 in San Patrignano/ITA, Montender/Marco Kutscher.  Contender died at the age of 30. The dam's sire Lasino, who competed internationally successful in show jumping under Jörg Kreutzmann, is one of the most significant sons of the sire of the century Landgraf I in the Holstein breeding and sired stallions such as Looping and Lovari. He leads heroes of Holstein breeding in direct line through Capitol I and Lord. Corleone, found in third generation, is a sire with international reputation. The great granddam Tira produced two advanced (S) level show jumpers named Escarda (by Fernando) and Checkles (by Corofino I). The sire Calando I, who competed successfully in the international show jumping under Karsten Huck and Edgar-Henri Cüpper/BEL, rounds off the pedigree. The Holstein line 3407, which presented numerous advanced (S) level show jumpers, is also known for the licensed stallion Le Grand Plaisir AB and the premium awarded Lord Fernando AB.