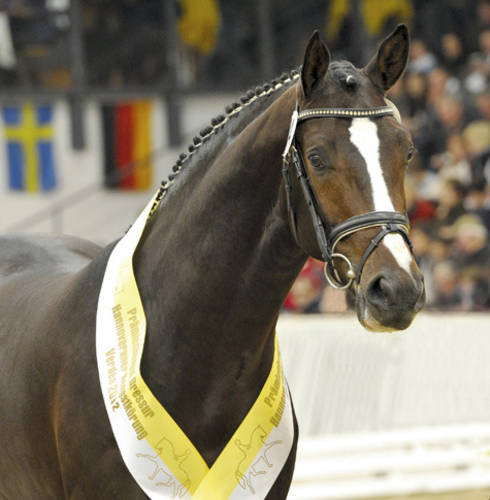 Coal Diamond was premium stallion and price highlight at the Hanoverian main licensing in Verden in 2012. This large stallion stands out due to his impressive and harmoniously built conformation combined with outstanding quality of basic gaits, especially his walk. Much inner peace and a first-class character make his temperament being exemplary. In 2013 he made his first-class debut in sport: He won several times in tests for youngster and placed third in the Hanoverian Championship in Verden. Soon afterwards, he took the title Vice Bundeschampion in the class for three-year old stallions at the Bundeschampionat in Warendorf. At the end of 2013 he finished his 30-day test with top scores (9.0 for rideability) and placed finally fifth among 40 strong competitors in Schlieckau.

In 2016, just recently, Coal Diamond won the qualifier for the Bundeschampionat in dressage with a score of 8.2 under Sabine Rüben in Neustadt/Dosse. He received a 9.0 for trot and booked his ticket to Warendorf sovereignly.

In the last years, his still young sire Christ, trained up to advanced (S) level, presented radiant sons at the German licensing sites, including several champion and premium stallions.

The dam, State Premium mare Donauperle, is a daughter of the top Oldenburg sire Don Schufro, who himself won the rideability index with 150 points at his stallion performance test in Adelheidsdorf. In 2004, he and Andreas Helgstrand achieved the title of the Danish Vice Champion in dressage and qualified for the Olympic Games in Athens/GRE. One year later he placed first in Wiesbaden and in the World Cup qualifier in Vilhelmsborg/DEN. In 2006 the couple won in Bremen and repeated their World Cup success in Vilhelmsborg/DEN. Then they took the team bronze medal in Beijing in 2008.

Since 2001, Don Schufro is in the lead of Germany's top sires according to FN's predicted breeding value statistics. In 2013 a life-size monument of him has been built.