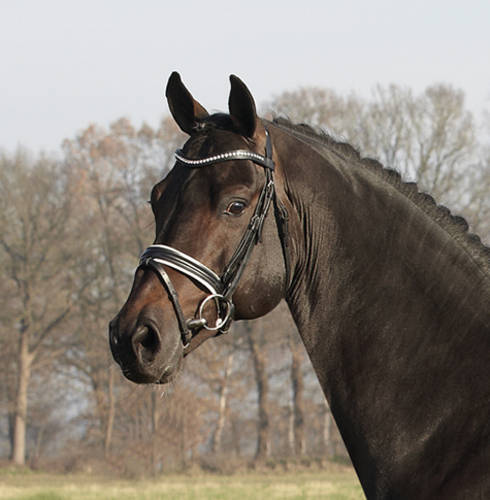 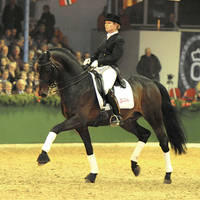 The Champion Stallion of the 2002’ Holsteiner licensing proved to be a champion sire right away: He is one of only a few sires in breeding today who passes on multi talents which makes him right for nearly every pedigree. Thereby, he consequently passes on his own best traits such as top gaits, rideability and ability to jump. In 2006 his first son was licensed at the Oldenburg licensing: Premium stallion Cevin Costner, who meanwhile competes successfully up to 1.50m-level under Jan and Josef-Jonas Sprehe; in 2007, a second licensed son named Chat Qiu Rit de L, who is meanwhile successful at championship level in Southern Germany, followed. Since then, the number of his licensed sons has grown continually, including Chakiro, Chico’s EGI, Chicos Son, Cold as Ice, Come and Fight and Chico’s Hero. Furthermore, Chico's Boy presented several state premium mares, champion mares and elite auction horses.

Chico’s Boy himself won tests for young riding and dressage horses, was nominated for the Bundeschampionat in the class for riding horses and also did an outstanding job at his 30-days test in Schlieckau. In 2006 he was winner at his 70-day test in Neustadt (Dosse) with top scores for rideability (8.88) and jumping talent (9.03).

Chico's Boy has sent offspring from his first crops to diverse German and European auctions of Verbands. Top prices were paid at foal auctions, among those, the price highlight at the Swiss elite foal auction in Frauenfeld and a record price of 40,000 € in Benstrup. In 2009, Chico's Boy son Chianti placed third in the French Championship for young eventers on the occasion of „Grande Semaine de Pompadour“. Several daughters received premiums at broodmare shows and he is the sire of a Brillantring mare at the Elite Broodmare Show in Rastede as well as other State Premium mares in Oldenburg, Hanover and Saxony-Thuringia.

His sire Carpaccio won his stallion performance test. In 1996 he placed in the Bundeschampionat Final for five-year old dressage horses and qualified for Warendorf again the following year. Nine of Carpaccio's sons have been licensed, including Cabardino N, the 1st Reserve Champion of the Springpferdezuchtverband Oldenburg-International licensing in 2002 as well as Carpalo, Casparino, Chandon, Clooney and Cruyff. Successful offspring in show jumping are Colibri/Tobias Bachl, Classic Line/Cora Ackermann-Ripke and Catatani/Anna Maria Benner. The dam's sire Silbersee was one of the most successful stallions in international show jumping during the 1980s with Dr. Michael Rüping. One of his licensed sons is Spender S, who successfully competed in World Cups with Jos Lansink/Belgium as well as Maria Gretzer/Switzerland.

The granddam L-Cordula, who won ribbons in medium (M/A) level show jumping, is also the dam of the show jumpers Garibaldi (by Gajus) and Clint LB (by Camiros). As a granddaughter of Assa (by Farnese), she is a three-quarter sister of Carneval, Cor de la Bryère's first champion stallion. L-Cordula's half-sister Nagate (by Landgraf I) competed in show jumping up to advanced (S) level before giving birth to a licensed stallion named Abdulkarim (by Athlet Z), who placed in advanced (S***) level show jumping under Bernd Schulze Topphoff. L-Cordula's half-brother Almox Athletico (by Athlet Z) won Grand Prix and Nations Cups with Ludger Beerbaum. Chico’s Boy goes back to line 104a which is also the origin of stallions such as Aldan, Capitano, Caretano, Carloni, Carneval, Celano, Contendro I and II, Conteur, Corland, Corlandus, Corretto, Cranach, Joliot, Landego, Landetto, Laurin, Leuthen I and II, Lonely Boy, Lorcan, Medoc and Morphy as well as the top international horses Retina/Fritz Thiedemann, Athlet and Corlanda/both Willi Melliger/Switzerland.