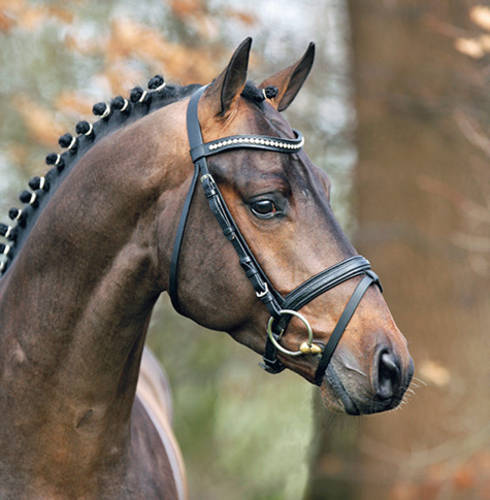 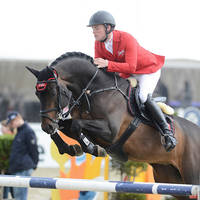 A noble, master jumper for the highest demands. The technique, bascule and ability he shows when jumping is something you have to see! Always uphill, this pure Holstein athlete also earns the best scores for his gaits. Cevin Costner was awarded the I-h premium at the 2006 Oldenburg licensing and was the best Oldenburg jumper stallion at the licensing. Cevin Costner has also proved the outstanding quality of his pedigree many times. At his 30-day test in Prussendorf he was one of the best in the class with an overall score of 8.34. He underlined his versatility with a final score of 8.60 with emphasis on jumping as well as an 8.03 in the dressage area; he even received a 10.0 for his ability to jump and character! He took his 70-day test in Prussendorf as well in 2008 with very high scores in all areas, finishing third overall (performance class I). And again, his versatility must be pointed out, especially, because multi-talents like him became very seldom nowadays. He was trained with emphasis on jumping and won already tests for young show jumpers at novice (A), elementary (L) and medium (M) level. In 2009 he placed in the Bundeschampionat in Warendorf and is meanwhile successful in international advanced (S***) level show jumping competitions, such as Lanaken/BEL, Linz/AUT, Arnheim/NED and Frankfurt, under Jan Sprehe. Cevin Costner's eldest progeny have placed first many times in test for young show jumpers. According to FN's predicted breeding value statistics Cevin Costner belongs to the most versatile sires of Germany: 138 points for jumping and 113 points for dressage provide him an exceptional position among the German sires. His first son, Celensky, was licensed in 2010.

His sire Chico’s Boy not only won his licensing but also his stallion performance test. He became brilliantly established when his first crops were born with numerous premium foals, some of which were sold at various Verband auctions. His dam Callinda Z, who was successful in sport herself, is also the dam of Seicalla (by Seidon), a successful show jumper, as well as of Solid Gold ( by Stakkato Gold), another licensed son, who is now stationed at Stud Zangersheide. She is by the gray Holstein stallion Calvin (by Caletto II) whose bloodlines are 100 percent identical to those of the famous jumper maker Cantus, by Caletto I. In his first year of breeding in Rhineland-Pfalz-Saar, Calvin produced extremely classy horses, among others a licensed son named Casi (private stallion Rhineland-Pfalz, USA) who was later a highly esteemed sire in Ireland and later in Zangersheide. With Leuthen I and Ahorn Z you find significant performance-makers in the further generations of his pedigree. Cevin Costner comes from the successful Holstein mare line 5625 which produced many advanced (S) level show jumpers as well as the licensed stallions Cartano (private stallion Netherlands), Gastronom Z and Waterkant. Cartano, for example, is out of the successful jumper mare, E-Dream Girl/Sören von Rönne.

Licensed for Oldenburg, OS-International, Hanover, Westphalia and Rhineland as well as all Southern German and new German State Verbands. Admitted to the Hanoverian Jumper Breeding Program.