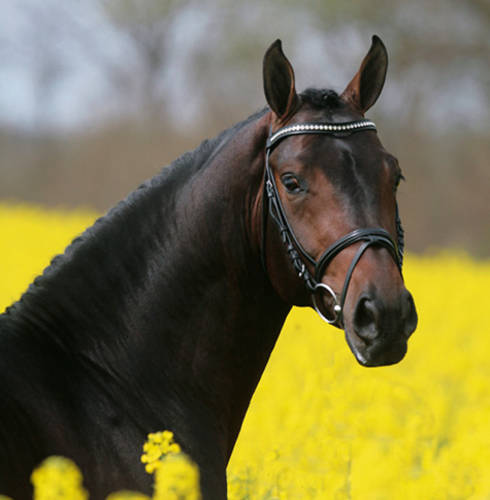 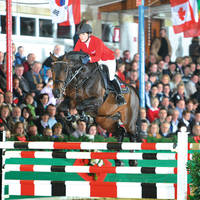 Hanoverian Champion of the 2007 Elite Auction in Verden

Now matured, Carlucci has the format of a sporty, modern main sire and is a real eye catcher with his dark coat, three good gaits and unbelievably good rideability. After successfully starting his career in Hesse, he changed hands at the Hanoverian Spring Auction in 2007 for a price that broke all records at the auctions in Verden and is now at Gestüt Sprehe where he successfully continues his career. Carlucci took his stallion performance test in Adelheidsdorf. His canter and constitution stood out and his great talent for jumping, on the course as well as on the cross country, was rewarded with top scores. As a four-year old he won and placed in novice (A) and elementary (L) level tests for young show jumpers. In 2008, after winning many elementary (L) and medium (M) level classes for young show jumpers, he was a finalist in the Bundeschampionat in the class for six-year old show jumpers. As of 2009 ribbons in medium (M) and advanced (S) level show jumping tests, also in international competitions, were added to Carlucci's record. The type and sporty looks of his first crops are convincing. The eldest are now successful at shows. They stand out due to their generously given jumping ability, which is confirmed impressively by the FN's estimated breeding value statistics in jumping (131 points) and dressage (116 points). In 2011 his first son named Cäsar was licensed in Zweibrücken.

Licensed for Hanover, Oldenburg, OS-International, Westphalia and Rhineland as well as all Southern German and new German State Verbands. Admitted to the Hanoverian Jumper Breeding Program.