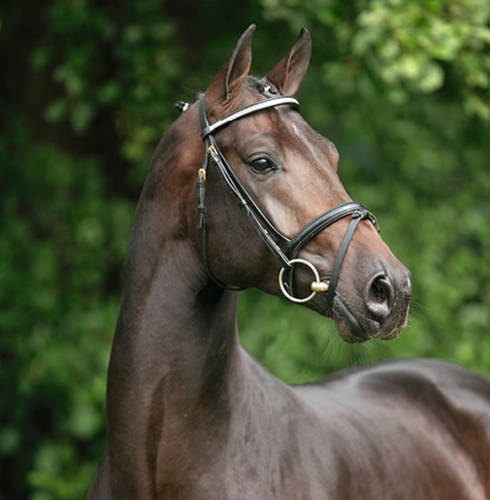 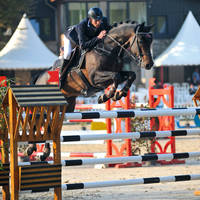 Best stallion in jumping at the aptitude test

A profiled sire with first class attributes for sport and breeding. Strong type Carenzo was awarded a premium at the 2005 licensing in Verden – second Reserve Champion of stallions with emphasis on jumping. He turned out to be extremely talented for the course, richly blessed with all of the attributes of a top athletes and made a clear performance statement. His outstanding uphill movements that swing through his whole body, a canter that is just a dream and first class qualities in jumping when it comes to ability, leg technique and bascule make this young stallion especially worthy.

He also dominated his competitors at the 30-day test in Zweibrücken in 2006 with the best score in jumping of 8.88. In 2008 he took his 70-day test in Schlieckau, finishing with a well-balanced, positive result that underlined his versatile talents. He won novice (A) and elementary (L) classes for young show jumpers and has meanwhile placed among the best in medium (M**) and advanced (S) level show jumping tests. The long-legged, strong type foals in Carenzo's first crops, which also had enormous movement potential, stood out and many of them were awarded a premium. The quality of his foals along with his good stallion performance test and his first success in sport resulted in the I-b main premium in the group of stallions with emphasis on jumping at the Oldenburg Hengsttage 2008 in Vechta. Three of his sons were immediately licensed in 2010. His eldest offspring have won tests for young show jumpers, catapulting their sire to a place among the top 5 % of all German jumper-makers according to the German FN's predicted breeding value statistics.

His sire Calido I proved his own qualities for sport by taking first place in the jumping index at his stallion performance test in Adelheidsdorf in 1994. He then went on to win many tests for young show jumpers and successfully competed in the Bundeschampionat twice. From a breeding point of view, Calido I is the most influential son of the famous Cantus. He sired top horses by the dozens such as Coupe de Coeur, who became German Champion in 2006 and 2007 with Rene Tebbel, more than 50 other licensed sons, many State Premium mares and more than 200 advanced (S) level show jumpers. The dam's sire Freedom Z (today in USA) was bred in Zangersheide out of a full sister of the world famous Ratina Z (Ludger Beerbaum) just like the sires Rebel Z I to III. During a brief breeding period in Germany, he produced several show jumpers that were successful in advanced (S) level show jumping.

Licensed for Hanover, Oldenburg, OS-International, Westphalia and Rhineland as well as all Southern German and new German State Verbands. Admitted to the Hanoverian Jumper Breeding Program.