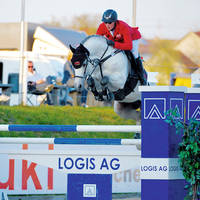 This highly modern and thoroughbred-typed Cassini I son has a convincing top line, faultless conformation, good gaits and an energetic push-off at the jump with lots of rubber, a good bascule and enormous ability. Calico took his 30-day test in Neustadt/Dosse in 2006 and, as expected, his scores for rideability, his canter and ability to jump were excellent. Proof of his ability to perform required for licensing was furnished by qualifying for the 2008 Bundeschampionat. Calico has won many tests for young show jumpers up to medium (M) level and placed with the best at advanced level. In the meantime, he gleams under Tobias Meyer in international arenas (S***), achieved placings, amongst others, in Arnheim/NED, Lampechtshausen/AUT, Linz/AUT and Nörten-Hardenberg. You see his elegance and noble looks in his foals and with their light-footedness and sporty appearance, they know to convince. Many of the foals from his first crops were awarded premiums in different breeding areas from various German Verbands.

Until now, he presented three premium awarded licensed sons: Chelsea London became  Reserve Champion of the 2010' Weser-Ems licensing and Comissar Calico received a premium at the 2010 Mecklenburg licensing in Redefin. In 2013, he presented the premium stallion Cannon at the OS licensing in Vechta. Now, the eldest offspring are successful in advanced (S) show jumping classes and gifted his sire the very good breeding value in jumping of 133 points according to FN's estimated breeding value statistics. In 2013, the Calico son named Calino placed fourth at the Bundeschampionat for five- year old show jumpers under Hendrik Dowe.

His sire Cassini I, a Holstein Verband stallion, is one of the most popular jumper-makers in the world today. He won many ribbons with Franke Sloothaak in Nations Cups and World Cups and also sired numerous top international sport horses such as the current World Champion, Cumano (Jos Lansink/NL) and Berlin (Wim Schröder/NL), Isolvas Olympic (Steve Guerdat/CH) who participated in the Olympic in Athens in 2004 or Carino (Ulli Kirchhoff) and Ingmar (Pia-Luise Aufrecht). Calico’s dam Caprice III was also bred to Lux Z, resulting in the licensed stallion Lagunas, who did an outstanding job at his 100-day test in Warendorf in 1995, finishing with a very high index in jumping of 137.53 points. In Rhineland he left very good show jumpers behind before he moved to the Netherlands. Bred to Cassini II, Caprice produced the licensed Cortado (Denmark). Calico's full sister was awarded a State Premium and passed her broodmare performance test with a 9.0. The dam line is highly refined and strong in performance through the highly esteemed Ladykiller xx sons, Lorenz and Latino. The refined Mabuse and Napoleon are found in the further generations on the dam's side, registered as line 6660. From this line and closely related are four further State Premium mares, including two breeding district show winners.