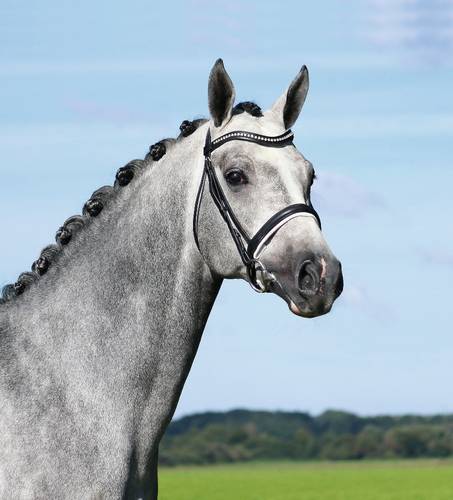 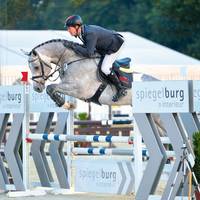 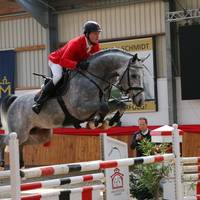 Premium stallion of the OS licensing 2013 in Vechta, where he gave rise to a veritable storm of enthusiasm among the audience. Calcio is an eye-catcher with a certain Arabian expression; he presents himself as lean, Thoroughbred-typed athlete of prominent optic. He is from our own stud and is exceptionally gifted for jumping in view of ability, leg technique and bascule. In 2014 these criteria were performed in an exemplary manner at his 30-day test in Zweibrücken where he received the maximum score of 10.0 for free-jumping. In 2015, he placed with the best in tests for young show jumpers right away and presented his first crop of foals, which were clearly characterized by their sire and many of them were awarded a premium. The best Holstein, Westphalian and Anglo-Norman genes are the dominating factors in the pedigree.

In the last years, the sire Calico has been standing out with victories in the international show jumping up to advanced (S***) level.

Donna Pila represents in a double sense the special connection of the Sprehe family to the tradition of horse breeding, because, on the one hand, she comes from the Oldenburg dam line of Domka II (by Rekord-Edelbert etc.), that is quasi the “nucleus” of breeding activities at the original farm of the Sprehe family in Südlohne, and, on the other hand, she is a daughter of Pilox, the founding stallion of Gestüt Sprehe.

Pilox finished his stallion performance test in Warendorf in 1994 with above-average scores among the best and after victories in tests for young show jumpers in the Bundeschampionat league he competed successfully in show jumping up to advanced (S) class. Before moving to the USA, he presented licensed sons named Highlife’s Pat, Pidgley, Prezioso S, Prince of Magic and Pro Savage.

The legendary liver-chestnut stallion Furioso II is found in third generation. Like no other stallion before or after him, he revolutionized the Oldenburg sport horse breeding in every respect. He produced licensing winners, show mares and successful horses at international level in all disciplines. The chestnut-colored Zeus, an Anglo-Norman like Furioso II, is found in fourth generation. For a long time Zeus had been stable mate of Furioso II in Cappeln and became one of the most popular jumper-sires of his generation. Another “Cappeln classics”, namely the extremely versatile inheriting Irish gray Thoroughbred sire More Magic xx, rounds off the pedigree brilliantly. This line is also known for the licensed stallions Cäsar, Come Undone (internationally successful show jumper with Denis Nielsen) and Fürst Gadow (leased stallion at state stud Neustadt/D., private stallion Mecklenburg).