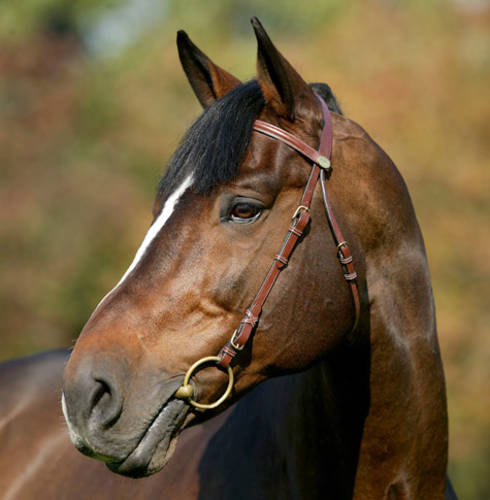 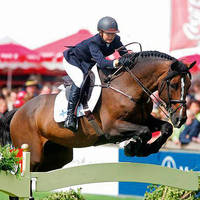 A Holstein performance stallion XXL in size. A quote by Sweden's National Trainer, Henk Nooren concerning Cagliostro: "A show jumper for the decisive championships. He has everything: rideability, intelligence, caution and enormous ability." He started his international career with Rolf-Göran Bengtsson and was later successfully ridden for Sweden by Niklas Arvidsson, winning first and other high placings all over the globe. Cagliostro was often a member of the Swedish National Team and also took seventh place in the Show Jumping World Cup in Leipzig. The end of 2005 Cagliostro also won ribbons with his young Finnish rider, Noora Pentti. In 2006 they competed in World Cups and took third place in the Grand Prix of Ypäjä (Finland) and in Nations Cup as well as third place in the Grand Prix at the CSI Gera and were a member of the Finnish team at the World Championships in Aachen in 2006. Because of his great success in international show jumping, Cagliostro was also approved for Holstein in 2004. Cagliostro's career in breeding began in Sweden where he sired first class show jumpers. Internationally famous riders compete with his offspring such as Bee Wonderfull with Linda Heed and Kensington T, who places internationally under Alexander Zettermann. At the European Championships in Windsor in 2009, Cagliostro went a sensational clear round in the warm-up test.

His sire, Calando I, not only had enormous jumping ability but also an excellent leg technique and a bascule that comes as close to perfect as possible. He proved this ability for many years in sport and among his many achievements, he also became the 1984 German Show Jumping Champion under Karsten Huck. Calando I consistently passed on his great qualities in jumping as well as robustness and longevity. Calando I left behind more than 100 registered daughters and reached the ripe old age of 30. The dam's sire, Liostro, sired several licensed sons, the best of which is the internationally successful gray, Levantos II. The granddam, Ella, is the dam of the jumper stallion named Constant (Dr. Michael Rüping and H.-G. Winkler), a highly esteemed sire who in turn sired Chin Chin, another first class stallion for breeding and sport. Ella's other licensed sons were the Ronald son, Randers, who won more than 40 advanced (S) level show jumping competitions under Bernd Herbert, the Le Grans I son, Le Sauvage (Canada), and Toborzo (Hungary), who is also the sire of Almox Poker/Markus Beerbaum. The great granddam, Dorette, is the dam of the outstanding sires, Farn and Roman, as well as the granddam of the above mentioned Ronald. She belongs to line 18 b 1 which produced numerous stallions, including the famous sires, Farn, Lagos, Landsdown, Laudon, Legendär I and Legendär II, Placido by Paemel, Quantum, Silvestre and the internationally successful show jumper, Campesino/Thomas Voß.