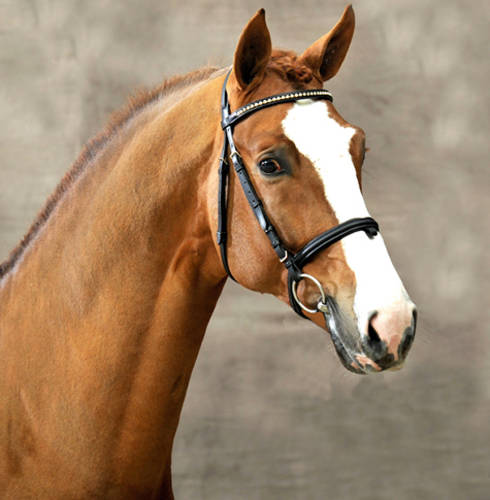 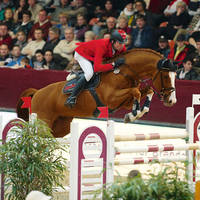 Burberry was first Reserve Champion at the main licensing in Neustadt/Dosse in 2007. Thereby, this true to type multi-talent stood out with supple, carried and ground-covering movements, which absolutely inspire. At the jump he knows to convince with phenomenal jumping ability, cautiousness and outstanding manner of jumping. Furthermore, he has an excellent character. A horse of special quality with dominating character. Burberry also took his 30-day test in Neustadt/Dosse in 2008 which he passed with convincing scores in all areas. Several times he won or placed with the best in novice (A), elementary (L) and medium (M) level tests for young show jumpers. In the meantime, he competes successfully under Denis Nielsen and Jan Sprehe in international advanced (S) level show jumping. Several of the foals from the first crops were awarded a premium.

The licensed son Bankimoon achieved meanwhile many victories in tests for young show jumpers. Burberry unites the best French and Oldenburg blood lines in his pedigree. The sire Balou du Rouet placed with the best in the final of the Bundeschampionat. In the meantime, he is successful in the international show jumping and presented numerous licensed sons at the German licensing venues. Burberry's dam, state premium and elite mare Ibiza, was herself highly successful and winner of her broodmare performance test. Her sire Quando-Quando gave already prove of his double-talent at his licensing in Oldenburg with superior jumping-ability and fantastic basic gaits.

Under Kristy Oatley-Nist (AUS), Quando-Quando has become a highly successful, international championship horse and his reputation as a top sire of exceptional versatility continues to gain impetus. In third generation you can find the strong performer Westphalian Frühlingsbote, who had moved to the GDR still prior to the unification of Germany. Her has been a very demanded sire for years and produced also the licensed Freeholder and Frühtau; in addition, he was dam's sire of stallions such as Levistano, Lovson, Samtorio and Sommerhit. Adept, found in fourth generation, entered the former GDR as young stallion in 1973. When breeding as main sire in Neustadt/Dosse the bay Hanoverian presented 20 licensed sons. The dam line of Elster (by Friese-Maiwot) which was at home in Brandenburg at that time and is still maintained there today, is also the origin of the stallions Aspirant and Brauer (state stud Moritzburg), Banner, Doriano, Duellano, Freeholder and Parameter (all state stud Neustadt/D.) as well as Dirk and Fidus (state stud Redefin).

Licensed for Berlin-Brandenburg, Oldenburg, Springpferdezuchtverband Oldenburg-International, Westphalia and Rhineland as well as all Southern German and new German State Verbands.